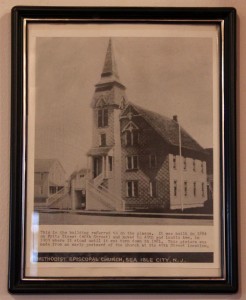 Charles Klein Landis (Sea Isle city’s founder) gave two lots on 40th St. to the Methodist for the building of their church. They had the meeting since 1882 private home. The cornerstone was laid on September 13, 1883 and the building completed in 1884, with Rev. Cheesman serving for three years as pastor.  In 1897 a social hall was built underneath the sanctuary. In 1905 the church building was moved to the corner of Landis Avenue and 45th St. because of the loud noise of the trains at 40th St.

In 1956 the congregation had grown so much that it was decided to build a new church and eight lots were purchased facing the 41st St., Parkway. The parsonage was erected in 1961 and Rev. Sawn moved in just prior to the 1962 storm. The church and parsonage were both high and dry.

In 1962 our church was given a guest home by the Wheaton family which was used by ministers during the summer months. A steeple was added to our church sanctuary in 1963. In 1970 our church housed school pupils while the new public school was being constructed. In 1980 Pastor Ruff began the Crossroads Coffee House in our old church building and it was a sad day when On October 1, 1981 the building was demolished.  You can see a picture of the church on the wall in the rear of the sanctuary.

We had building programs and added classrooms in 1982 with phase 2 completed in 1985 under the leadership of Rev. Nichols. In September 1986 pupils once again attended our facility as the Children of Promise began. In 1987 we purchased and Allen organ. In January 1994 a lighted Memorial Cross was added to the front of the sanctuary.

The Sea Isle City United Methodist Church has been a beacon to others for over 100 years and has been an outreach to both the community and missionaries throughout the world. Let us hope the next 100 years will be just as successful. 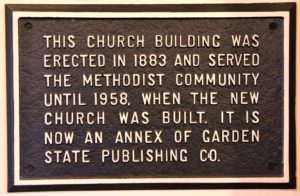 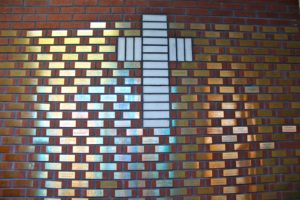 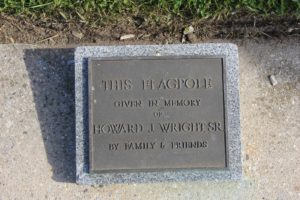